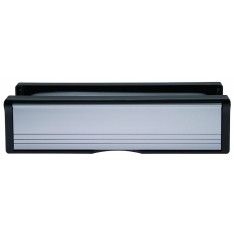 Letter boxes are a common feature for most doorways at the front of both commercial and domestic establishments. The space that is taken up could be severely compromised during a fire and cause structural damage to the door and potentially other areas of a building. We have a selection of Intumescent Letter Plate designs that have been manufactured with an intumescent sealing to ensure you have maximised the safety you have in place for your doorway.

We also have a wide selection of Fire Seals to ensure the gap between the door and frame have been appropriately equipped, ready for any fire related incident. Our models have all been made with an intumescent sealing which will expand once exposed to extreme heat and block fire from leaving rooms and spreading further into buildings.

The outbreak of a fire is likely to cause the circulation of smoke and harmful toxins. These will need to be contained effectively in order to reduce the likelihood of harm to anyone present during a fire. We have a range of Fire and Smoke Seals which have been specially modified to block fire from leaving rooms as well as preventing harmful smoke filtering into other areas.

Locks and hinges are also likely to incur severe damage during a fire unless they have the appropriate protection in place. We have a range of both Intumescent Lock Packs and Intumescent Hinge Packs, ready to provide the essential protective seal for any doorway.

Finally, we have a selection of ventilation products with intumescent sealing on our Miscellaneous Intumescent page. These designs are the perfect way to ensure that any device regulating air will not incur damage during a fire and spread dangerous toxins throughout buildings.